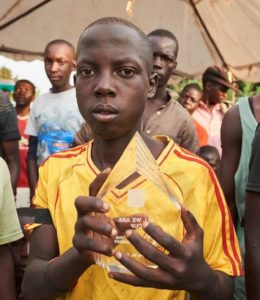 This is Di Maria.

His real name is Asaba Ivan, and earned his nickname after the famous Argentinian soccer player Ángel Di Maria through his standout talent. He is 15 years old and has recently graduated from ABC Divine Primary School, an AWA school in Mutundwe, Uganda. He now attends Kibili Secondary School—locally known as Baanaz—in Kampala.

If you thought that this was a typical introduction to the narration of a 15-year-old Ugandan boy, you are mistaken. In areas where Kickin’ It Back operates, poverty is prevalent and unemployment rates are very high. Many families are unable to afford school fees for their children, who often resort to unhealthy ways to fill their time and minds.

Ivan’s family is no exception. They live in an impoverished area of Uganda and are unable to afford the costs of schooling. However, Ivan showed promise in his soccer ability, and was able to earn an athletic scholarship to attend ABC Divine in 2008 to continue his education and hone his skills.

Here, Ivan grew into a great soccer player, and earned the nickname Di Maria. Over the past few years, he has helped ABC Divine establish themselves as one of the top primary schools in the Kampala area. However, as his primary school was coming to an end in 2016, so was his scholarship, and he was faced with the possibility of not being able to afford further education once more. When presented with the opportunity though, Di Maria was ready to take it, just as he had done in the past.

A few weeks ago, Kibili participated in a country-wide tournament sponsored by Coca-Cola and won the championship! At this tournament, there were scouts searching for talented players for professional teams. Di Maria is now in contact with the Kyadondo soccer team—which is participating in Masaza Cup—whose participants are mostly professional adults, and his future is very bright.

Di Maria’s story highlights “why we do what we do” with our KIB program, and how we can open similar doors for more children throughout the world. We believe that what we do at KIB is a great way to not only help kids enjoy the game of soccer and foster their skills, but also to keep them off the streets of the slums, and further their education. KIB is more than a soccer program—it’s a way to bring hope to the children who need it most.

Changing the World: From Student to AWA Member